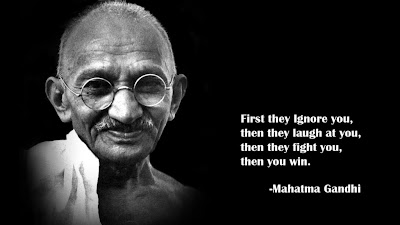 Understandably, real estate professionals will often assess their own degree of accomplishment according to the relative success of their competitors.  However, Realtors are also likely to take the criticism or negativity exhibited by their peers to heart when making business decisions.  Although competition can be a healthy motivator, it is also important to keep competition in its place.  Realtor's are well served to implement Mahatma Gandhi's legendary quote "First they ignore you, then they laugh at you, then they fight you, then you win" as a compass to guide them when facing competition along the road to success.

FIRST THEY IGNORE YOU

We hate to be ignored when we start out in business.  The need to be noticed and respected by our peers often drives our efforts to succeed.  It's hard to imagine that this will be the part of the journey where the least resistance will be encountered.

The key is to not let the relative success of others discourage you.  Instead, use competition to fuel your motivation.  Feeling the pressure to succeed can be a very healthy motivator if it's not permitted to rise to the level of stress or frustration that diverts your focus from your goals.  So don't get too attached to outcomes.  Instead diligently concentrate on the activities that will ultimately lead to success.

THEN THEY LAUGH AT YOU

For you to win you will likely start doing something a bit different than the masses.  There may be a degree of uniqueness in your approach that represents change.  Change is very frightening and uncomfortable for the status quo, so competitors may feel better if they ridicule your efforts to create the illusion that your presence isn't threatening - almost like whistling in the dark.

For example, an agent may claim that open houses are a waste of time.  Understand that open houses didn't work for them, but they do work for many.  Some agents will tell you that you should never put SOLD stickers on your signs so that buyer calls keep coming in, whereas others swear by them as a means to attract more listings from neighbors.  Some will say that they could never prospect by telephone with a good conscience since they despise receiving sales calls themselves.  They will allege that certain agents only have business because of family connections, a builder, an asset management account, and so on.  Are they correct?

The answer is that it depends.  It depends on any agent's particular business, clientele, effort, skill level, expertise, strategy, scripts, target market, method and attitude.  All of the aforementioned methods have worked well for many realtors, so determine what works for you and stick with it.  Don't worry about what does not necessarily work for your competitors.  Understand that they do this to make themselves feel better, so be sure to have empathy rather than contempt for them.  Be thankful that your efforts are at least being acknowledged by the competition and get back to focusing on your business.

THEN THEY FIGHT YOU

With increased success comes increased criticism, hostility, gossip and general negativity from competitors.  In fact, you might say that if you stop hearing criticism you may not be succeeding any longer.  So try using the unfavorable attitudes of competitors as barometers to regularly measure the degree of your success.

Also remember that it is up to you as to whether you choose to let this negativity distract you.  Notice that Gandhi's quote does not encourage fighting back, so the key here is to summon the discipline to continue focusing on the activities that generate the results that drive your business.  Simply allow the negativity of your competitors to continue diverting their focus on you.  As Henry Ford stated "The competitor to be feared is one who never bothers about you at all but goes on making his own business better all the time."

By focusing more cynical attention on your business and away from their own, the businesses of your peers will actually be disrupted themselves.  Like animals tangled in barbed wire, increased struggling just makes it worse.  Rather than concentrate their efforts on what they can do to improve their businesses to more effectively compete, they often allow their distaste for your presence to consume them.

Others will also take note. This obsession with criticizing your efforts will demonstrate to your competitors' peers and clients that your industry presence is respected, feared, and poses a significant threat to the competition.  Your competitors inadvertently market your business for you!  If one is to believe that adversity reveals true character, these negative attacks will only serve to damage your competition's existing business relationships.

Conversely, you will no longer emulate your competition as a benchmark for success. After all, the team in first place shouldn't be focusing on the second place team anyway.  Yet second place will naturally focus on first place - so act the part you want to play.  Looking over your shoulder at competitors to worry creates a mindset of scarcity.  Whereas diligent concentration on improving your own business develops the abundant mindset of an industry leader looking to continuously grow.

More from Brian Icenhower and The Real Estate Word: 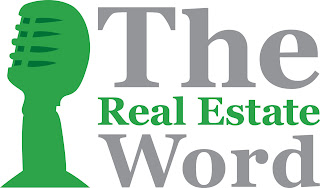