6 Reasons Why Real Estate is the Best Investment Again

Real estate has always been an attractive investment since it appreciates in value over time with the added benefit of positive monthly cash flow. Investors can buy low and sell high while making profit along the way.  This has never been more true than now as the global financial crisis that briefly shook the nation's confidence in housing has since yielded one of the most lucrative real estate investment climates in history.  There are six major contributing factors that can help explain why:


The Federal Housing Finance Agency (FHFA) recently released its House Price Index which shows that year-over-year national home prices rose 4.7% from August 2011.  Home values have reached the same level as in June 2004 and are just 15.9% below the peak prices experienced in April 2007.


Home ownership is becoming more affordable than renting at an increasing rate.  Historically low mortgage rates coupled with rising rents has now made it cheaper to own than rent in most markets.  Because the majority of home buyers make their buying decision based on the amount of the monthly mortgage payment, interest rates are an even larger factor than home prices.

As an example, in 1992 a $1,500 mortgage payment would permit a buyer to purchase a $175,000 home. Yet at today's unprecedentedly low interest rates a $305,000 house would yield the same $1,500 monthly payment.  That's an astonishing 75% increase in buying power!  Accordingly, the Wall Street Journal graphic below illustrates how the monthly mortgage payments for the median priced home are trending lower than the average rent levels in the majority of U.S. cities now. 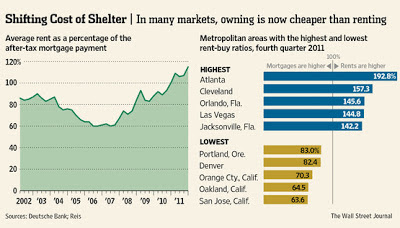 The formation of United States households is increasing home buyer demand at a rapid pace again. In the wake of the Great Recession from 2006 to 2011, a relatively low average of 570,000 households were added per year across the country.  But the year of 2012 is on pace to add over 1 million new households, which is more in line with the normal U.S. population growth rate of 1.2 million households per year. 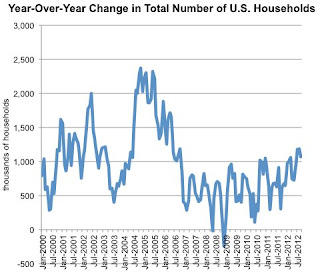 The inventory of foreclosures for sale in 2012 is down in most areas of the country.  As shown in the graphic below, RealtyTrac reports that forclosure starts are down 16% from the previous year and are are 55% lower than the peak levels reached in 2009.  CoreLogic has also reported that U.S. forclosure filings have steadily dropped for 3 consecutive quarters throughout 2012.  Since foreclosed houses are typically sold below market value, foreclosure sales have kept comparable home prices artificially low in recent years.  Now most local markets have stabilized and have seen significant appreciation in values again. 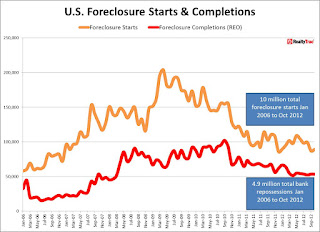 Purchasing a home is looking more affordable to owner-occupants and increasingly attractive to investors as rents continue to rise across the nation.  Rents rose 4.1% over the course of 2012 and will continue to rise at a rate of more than 4% per year through 2015 according to the National Association of Realtors and market researcher Reis.
According to Deutsche Bank housing analysts, the average cost to rent has traditionally been 10% lower than the cost of homeownership.  However, Deutsche Bank's research showed that by 2012 the national cost to rent was almost 15% higher than the cost of owning a home.
﻿ 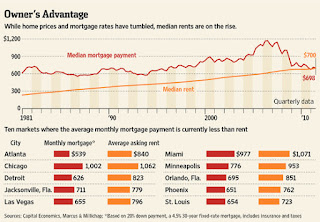 The amount of new homes for sale is at its lowest level in 50 years as home builders virtually halted construction over the past 3 years due to a poor economic climate.  Inventories of existing homes for sale are at a 10 year low, and are sharply down over the past year.  This scarcity of available homes has pushed buyer demand into competitive bidding situations and has significantly reduced foreclosure discounts. 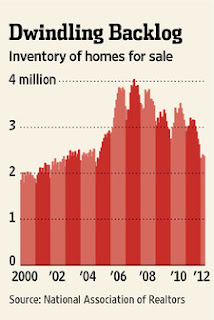 History has seen very few years where housing demand has leaped so far ahead of supply like it has over the course of just one year.  Will we all refer to 2012 as the year we should've invested in real estate?
Posted by Unknown at 3:14 PM