While teetering dangerously on the brink of fiscal cliff negotiations, the Federal Mortgage Forgiveness Debt Relief Act of 2007 that was set to expire on December 31, 2012 was extended for another year by the United States Congress.  As a result, homeowners who experience debt forgiveness through the short sale of their home prior to December 31, 2013 are exempt from paying federal income tax on the forgiven amount. The maximum amount of debt forgiven can not exceed $2 million. 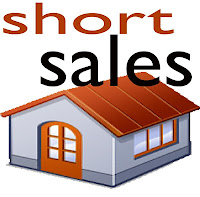 ﻿
Lawmakers reasoned that short sales have proven to be the most effective means to avert the devastating impact that increased foreclosures have had on the global economy, and that economic recovery currently remains too tenuous to resurrect barriers to foreclosure avoidance.  As shown in the RealtyTrac graphic below, short sales have been increasing at a rapid rate while sales of real estate owned by banks (REOs) or foreclosures have substantially decreased. It may not be so surprising that economic recovery has been realized over this same period of time. 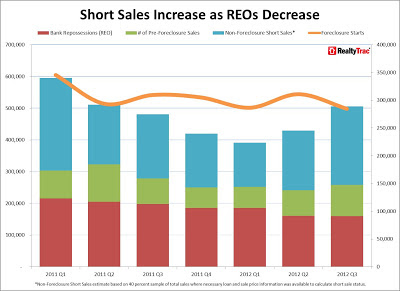 Now it's just up to real estate agents to once again spread the word to the general public that the federal government is still encouraging short sales for the sake of the global economy.
Posted by Unknown at 10:35 AM